The Ultraviolet Radiation (UVR) belongs to the subset of Non Ionizing Radiation (NIR) and occupies that portion of the electromagnetic spectrum from at least 100 to 400 nanometers (nm) corresponding to the photon energy from 12,4 to 3,1 (eV), respectively.
This spectral region has been further subdivided by the Commission Internationale de l'Eclairage (CIE) into three adjoining bands, designated:

Medical literature, in particular, reports band limits different from those established by CIE. Sometimes UV-B region extends from 280 to 320 nm and UV-A region is further subdivided into UV-A2  (320÷340 nm) and UV-A1 (340÷400 nm).
The critical organs for UVR exposure are the eye and the skin. The kind of the effects, their gravity or the probability that some of them occur, depend on radiant exposure, wavelength and, regarding some effects on the skin, the individual photosensivity, which is a genetically determined feature.
The effects produced on the eye and the skin can be classified depending on their temporal course into:
a) short term or acute exposure effects, with a lag period of hours or days;
b) long term or delayed exposure effects, with a lag period of months or years. Generally, it is possible to establish, for each acute effect, “the threshold dose” under which the effect does not occurr. Most of the long term effects are fundamentally different from the acute effects and their probability (skin cancer) or their gravity (photoaging of the skin) depends on the dose accumulated by the individual.

The parameter used to quantify the risk of skin photoinduced disorders onset for protection purposes is the Effective radiant exposure or Effective dose, Heff, obtained by integrating the spectral irradiance weighted against an action spectrum for erythema induction risk.


The action spectrum for erythema induction has been standardised by CIE (Commission International d’Eclairage), and is also used as a weighting curve for other photoinduced skin disorders, such as skin cancers.

Fig. 1  reports the graphical representation of the CIE standard curve which defines the action spectrum for erythema and the weighting curve established by ACGIH which defines the spectral effectiveness for UV radiation at different wavelengths.

The “Minimal Erythemal Dose” (MED) indicates UV radiation capacity to induce erythema and 1 MED is defined as the UVR exposure that will produce a just-perceptible erythema of the skin of an individual that has not previously exposed to the sun. However, as people are not equally sensitive to UV radiation due to different individual self-defence potential of the skin (pigmentation), 1 MED varies among European populations in a range from 200 to 500 ( J/m2). Table 2 shows MED values for various skin types according to DIN-5050 regulations. 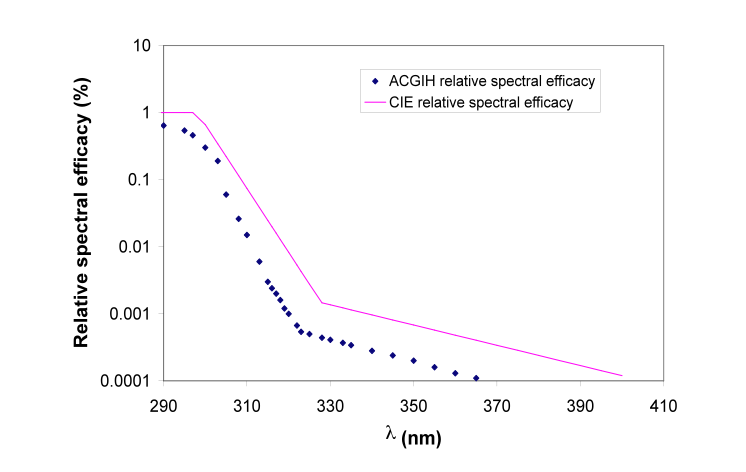 The minimal dose Heff   required for inducing erythema depends on the phototype of the exposed subject. For weakly pigmented Caucasians this dose ranges from 60 to 300 Jeff/m2.

The UV index is an index which predicts the intensity of daily solar ultraviolet radiation on the basis of sun position, cloudiness, altitude and ozone concentration. The UV index scale ranges from a minimum of 1 to a maximum of 12, the higher the number, the stronger the UV intensity. Table 1 reports pictograms adopted by WHO for the increasing hazard levels associated to UV index.
Its value results from the product of effective irradiance (W/m2) per 40.
Ex.g. : an effective irradiance of 0.1 W/m2 corresponds to a UV index of 4. Originally, the UV index has been defined in a different by each country and has been used to inform the general public about the hazards arising from UV radiation. Then, its definition has been standardized by World Health Organization (WHO), World Meteorological Organisation (WMO), United Nations Environment Programme (UNEP) and International Commission on Non-Ionizing Radiation Protection
(ICNIRP). The UV index is recommended as a tool for informing general public about health hazard derived from the exposure to UV radiation and about protection measures that can be adopted by the population. If cloudiness and other relevant environmental variables are considered when calculating UV indexes, correction factors used in the calculation should be established. 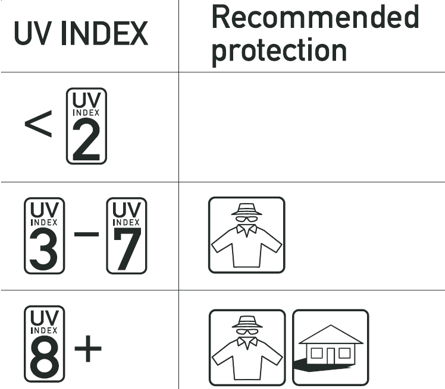 Fig. 2 Standard WHO pictograms for communicating the UV index to the population.